From renal salt-wasting to SIADH: a case report (#231)

Hyponatremia is common in patients with brain injury and is associated with significant morbidity and mortality.1,2 Clinical challenges include distinguishing syndrome of inappropriate ADH secretion (SIADH) from renal (cerebral) salt-wasting (RSW)3 and assessment in the presence of confounders, particularly concurrent medications or sodium natriuresis due to saline-containing intravenous fluids.4

20-year-old man presented with reduced consciousness (E2,V4,M5) after falling from his skateboard whilst intoxicated. He sustained a fractured skull-base and bilateral frontal contusions and was commenced on dexamethasone 12mg/day and an infusion of Hartman’s solution (containing sodium 131mmol/l). On day three, after three litres of intravenous fluid, he developed hyponatremia (serum sodium 131mmol/l); he had raised urine sodium (222mmol/l) and osmolality (742mmol/kg) with normal renal and thyroid function. His hyponatremia was initially treated as SIADH with fluid restriction (1.5litres/day) and oral salt (2.4g/d); however, his sodium fell (125mmol/l) triggering endocrine consultation. On review, he appeared clinically euvolemic, but was in negative fluid balance (-2.4 litres) and had a high urine output (3.9 litres/day) suggesting RSW. A saline challenge (1litre of 0.9% over 4 hours)2,5 resulted in a further fall in sodium level (123mmol/l). He was transferred to high dependency for hypertonic (3%) saline infusion with consequent improvement in sodium level (122mmol/l to 129mmol/l over 18hours) and neurological status; although longer-term he experienced persistent deficits in memory formation and executive function.

Clinical evaluation is important in differentiating RSW from SIADH,6 but accurate bed-side assessment of volume status may be problematic6 and laboratory tests are similar in both conditions.7,8 Traditional hyponatremia guidelines using volume status7 can limit the physicians’ diagnostic accuracy.9 RSW and SIADH may occur along a spectrum3,4 and may co-exist.10 Fluid restriction can cause harm in the neuro-critical patient, particularly after subarachnoid haemorrhage.4,8 Therefore, hypertonic saline may provide a useful approach for hyponatremia in the patient with acute brain injury.2,4 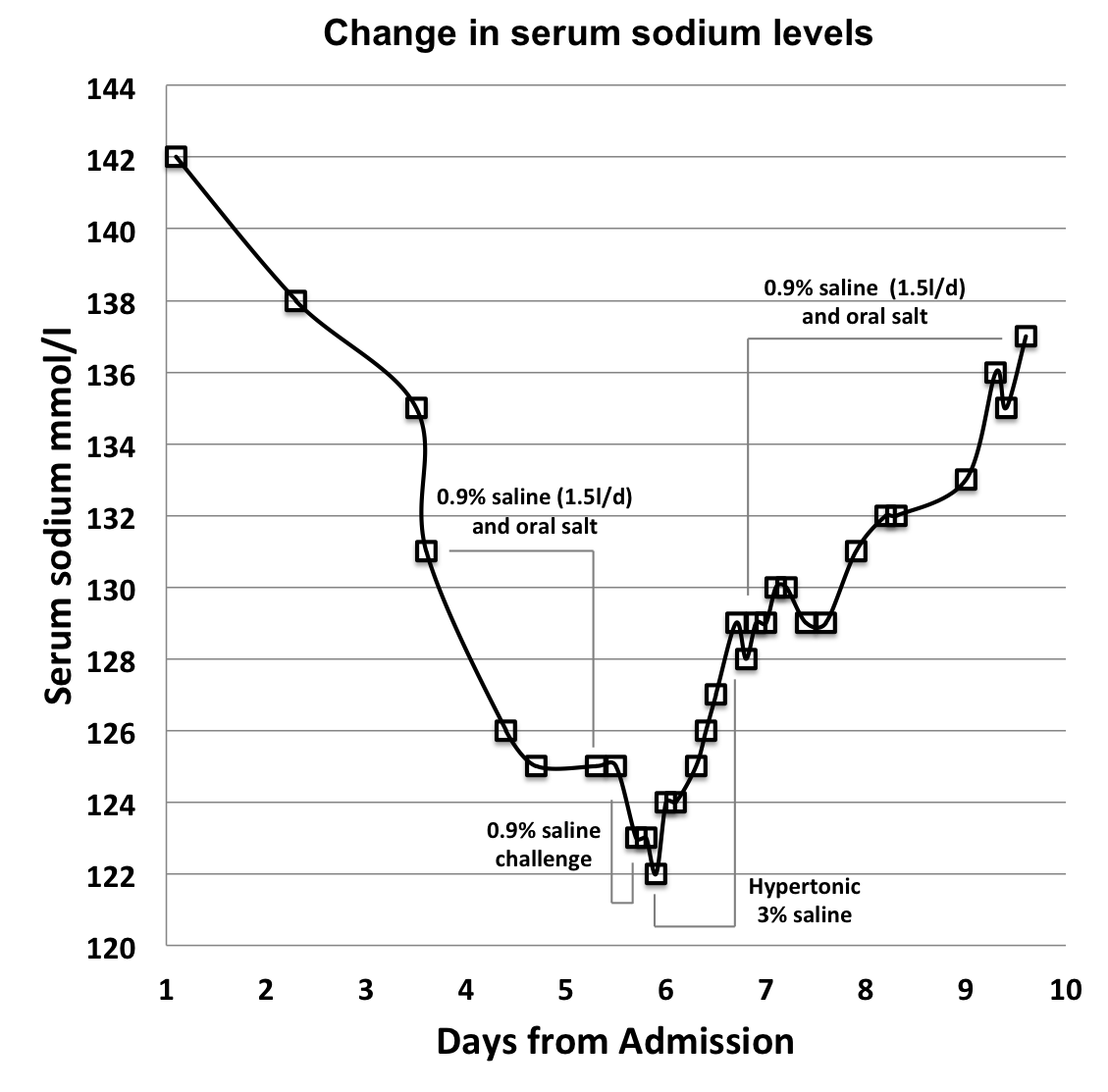