Hypoglycaemia secondary to the Warburg-effect (#178)

Cancer cells can metabolise glucose through aerobic-glycolysis, also known as the Warburg-effect.1 This pathway results in higher amounts of glucose being consumed to produce similar amounts of ATP as a normal cell with resultant hyperlactatemia or lactic-acidosis.1,2 Hypoglycaemia secondary to the Warburg-effect has been previously described. 3

A 76year old man with known myelodysplastic syndrome presents with worsening low back pain with incidental finding of asymptomatic hypoglycaemia of 2.4mmol/L (3.0-7.8).  There was no prior history of hypoglycaemia and no change in cognition.  He did not consume any alcohol. His medications included rosuvastatin, citalopram, aspirin, ramipril and metoprolol.

IV dextrose therapy did not correct the hypoglycemia but precipitated lactic-acidosis. At its highest, serum lactate was 21(0.5-2.2mmol/L). Although he remained hypoglycaemic for a few days despite IV dextrose, he did not have any symptoms. A literature search prompted the possibility of the Warburg-effect causing hypoglycaemia. This was confirmed through FDG-PET scanning, showing increased uptake in the bone-marrow with no uptake in the brain or heart. A bone-marrow aspirate proved the diagnosis of AML with 58% blast-cells. Following one dose of chemotherapy both lactic acidosis and hypoglycaemia resolved. 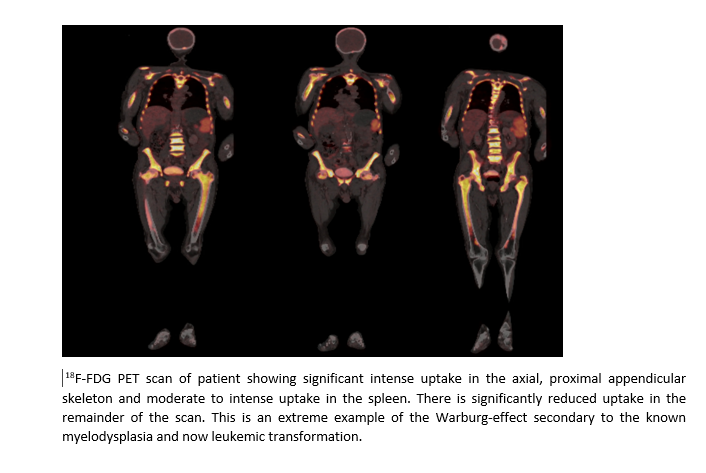 In cases of hypoglycaemia secondary to the Warburg-effect, IV dextrose has the potential to worsen the hypoglycaemia and increase serum lactate levels.3 Cure is possible with treatment of the underlying condition. It is known that lactate can replace glucose as a fuel in the brain even in the setting of hypoglycaemia through the ‘lactate-shuttle’ mechanism thereby preserving cognitive function.4,5,6,7,8