Antifungal treatment was given for eight months and immunosuppression was gradually reduced. Repeat MRI demonstrated a significant decrease in the sella mass and sphenoid sinus mucosal thickening but progressive left internal carotid narrowing - suspicious of angio-invasion.

Pituitary fungal infections are extremely rare and often mimic more common causes of sella lesions. Described risk factors are immunosuppression, pituitary surgery and irradiation. Spread can be either haematogenous, contiguous from a sphenoid sinus infection or iatrogenic.  Headache is the predominant symptom and aspergillus is the most common offending pathogen. MRI features include a hypo-intense heterogeneous cystic mass on T1 and hyper-intense mass with peripheral ring enhancement on T2. Definitive diagnosis can only be made by histopathology, microscopy and culture but consideration should be given to hormonal replacement and use of antifungal agents if clinical suspicion is high. 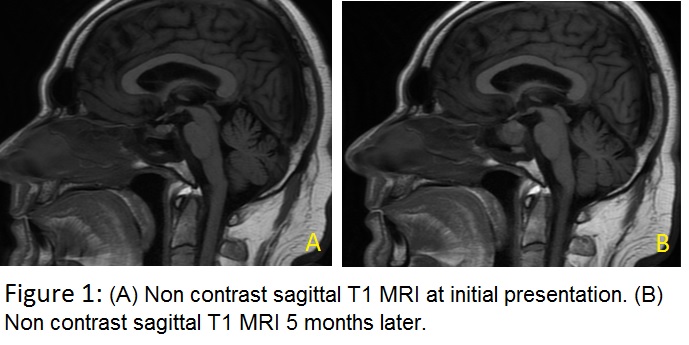