Use of prolactin in inferior petrosal sinus sampling is misleading (#154)

Objective: Petrosal prolactin measurement has been promoted to improve the diagnostic accuracy of inferior petrosal sinus sampling (IPSS), beyond that achieved with ACTH measurement alone, in diagnosing a pituitary ACTH source and determining corticotrophinoma side in Cushing's disease.1-3 Our objective was to assess the effect of using prolactin to confirm adequacy of petrosal cannulation in patients with ACTH-dependent Cushing’s syndrome.

Methods: We performed a retrospective cohort study of thirteen consecutive patients with clinical and biochemical Cushing’s syndrome who underwent IPSS with prospective measurement of prolactin and ACTH in peripheral and inferior petrosal sinus blood before and after corticotrophin-releasing hormone (CRH) injection.

Results: All thirteen patients were diagnosed with Cushing’s disease using uncorrected ACTH ratios. ACTH and prolactin intersinus gradients ≥1.4 were present in all patients. The side of PRL excess was the same as the side of ACTH excess in all cases (Fig 1). Use of published prolactin-related equations suggested that one petrosal sinus was not cannulated in four, six or seven patients depending on the equation used. In every case, it was the ACTH non-dominant side that appeared to have not been cannulated. The equations decreased the central-to-peripheral gradient on the uncorrected ACTH dominant side and increased the central-to-peripheral gradient on the contralateral side, such that either two or four patients fulfilled criteria for EAS or indeterminate results depending on the equation used. Finally, prolactin-corrected ACTH intersinus gradients diminished or even reversed the ACTH intersinus gradient.

Conclusions: Consistent co-lateralisation of prolactin and ACTH in IPSS strongly suggests that prolactin cannot act as an independent guide to proximity to the pituitary. All patients with Cushing’s disease had a prolactin intersinus gradient towards the tumourous side of the pituitary, for likely biological reasons. Prolactin-corrected ACTH concentrations may threaten the sensitivity and specificity of IPSS in diagnosing Cushing’s disease and conceal lateralisation. 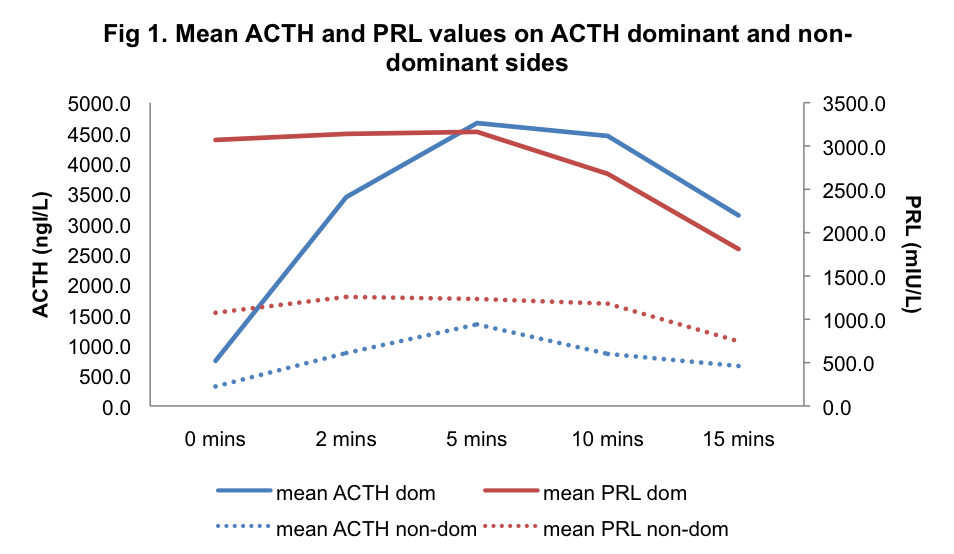